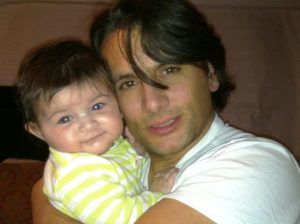 If Sophie taught us anything it’s that you get to fall in love more than once in your life. With the addition of our second nugget to the mix our family is now complete.

Sophie is someone I would describe as one of the sweetest souls I have ever met. From the moment she entered this world she has been about sharing this infectious warmth. In fact at the age of two and a half there is no better way to sleep than to have her nuzzle against you in the bed or greet you with a little bear’s hug in the morning. And although she’s meant to sleep in the crib I have to admit I treasure those nights we get to have her with us.

She’s actually so cuddly Jen and I both refer to her as our little bear cub. And like a sweet bear cub Sophie is always getting herself into whatever she can. Whether that’s burrowing into her favorite cabinet in the kitchen, vaulting over our ottoman or just melting into the couch.

Like her sister, Sophie is gifted with an exceptional imagination and fills her day with tea parties, puppet shows and more princess costumes than I have ever seen. With her love of painting and drawing, Sophie has taken to creating a world that is all her own.

Most recently with Hannah’s move to kindergarten, Sophie has gotten the chance to experience more one-on-one time with her mother and it’s amazing to watch that bond grow even stronger. Although as much as she enjoys being the center of attention, it isn’t long that she’s asking when her big sister will be home.

And while Jen and I adore the girls, it’s good to know that as they get older they’ll always have each other to rely on and take care of as they go through this world together.